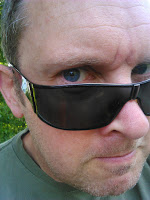 It’s been well over two weeks since the start of the new river season, but until very recently, I haven’t felt the need to wet a line in any of the local rivers. Sure, there was the excitement of the glorious 16th, and several trips to the water’s edge (armed only with polarised gigs and a childish grin) just to see how things looked, and to check out the likely fish-holding spots. The grin was short-lived, as none of the stretches looked particularly inviting. I just wasn’t “feeling it”, especially when I recalled numerous tales of first-day woes from seasons gone by. I know people who religiously book the day off work, sometimes even the whole week, and many of them camp out on the night of the 15th so they can literally make the first cast at the stroke of midnight. Good on them I say. I get it, but it's never been my thing. You hear the odd report of successful first day sessions, but generally I associate the glorious 16th with not-so-glorious results.

Don’t get me wrong: I have been splodging a few times in the last couple of weeks, it’s just that I chose to fish the canal whilst everyone else was out thrashing the rivers. 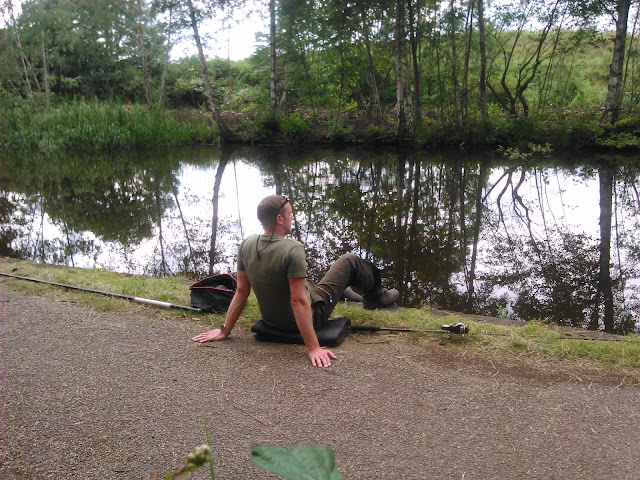 I’ve always been an awkward chuff!


I promised myself that I would stay away from flowing water until it felt right. I was proved right too, as subsequent reports have shown that only the hordes of nuisance brownies have been feeding with any intent. Brownies serve a specific purpose for me: they’re great in desperate times when I just need a bend in the rod, but generally, unless they’re over 2lb (which they almost always aren’t!) they’re a bleedin’ pain in the arse. 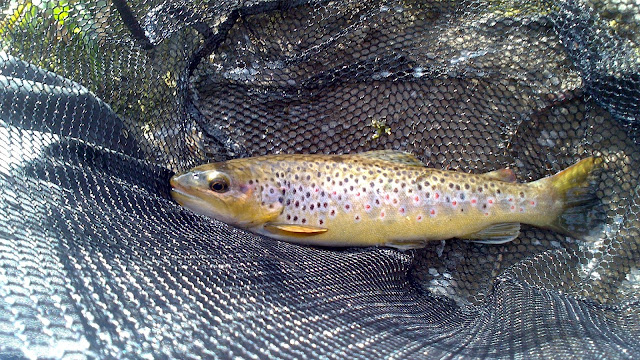 We have a love / hate relationship, brown trout and I. When I rediscovered fishing they were a source of excitement, almost an exotic species to me, as I'd never fished for them during my first stint. They eat pretty much all the traditional baits: maggots, casters, worms, bread, corn, pellets (if pellets can be classed as traditional?!), and they are so aggressive you really can't miss the bites. They fight like hell, often spending more time out of the water than in. So what's the problem? Well, they're too easy to catch for one - daft as that may sound, and I like a bit of a challenge. More importantly though, I resent them, for they seem to have displaced pretty much all the once plentiful coarse fish in the upper reaches of the Don. In reality, they're probably not responsible for this at all, as all species used to co-exist as I recall. It's more likely that the majority of fish got washed downstream in last decade's floods, with only the trout able to make it back to the upper reaches (if there's one thing trout are good at it's travelling upstream!).

Anyways, the back end of last week felt different. “Right”, you might say. On Thursday evening I gathered some stuff together for a short roving session on the off chance that I would “feel it” after work on Friday (you could call it a pre-feeling feeling!). I also formulated a plan to negate the nuisance trout, and I even had a specific stretch of the Don lodged in my mind too. The window of opportunity would be small, though. One hour was going to be all the time I had to locate, fool, net, weigh and possibly kiss (in the style of Rex Hunt – and that’s not rhyming slang!) a sizeable chub or barbel.


Things looked good right from the off. The weather, warm, overcast and fairly dry, was doing its bit. According to the EA river levels website, the Don was carrying a bit of extra water, but was dropping nicely. I had heard of a few chub being caught the day before, too (thanks, John).


My plan was as follows: 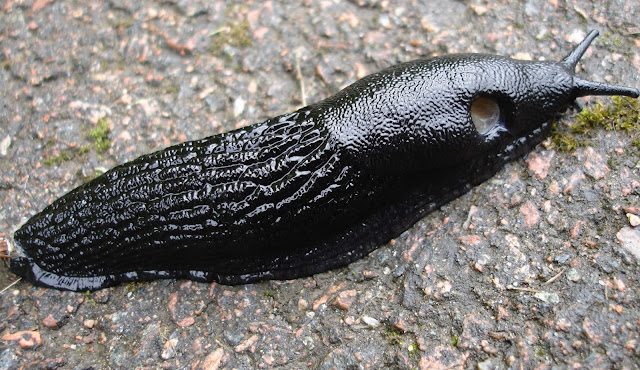 There. I couldn’t possibly fail. So with made-up Avon rod in hand, and waders…erm…on legs(!), I made my way down the footpath beside the Don – straight past the occasionally fished accessible pegs, and into the jungle! Over the hand railing, down the almost sheer overgrown banking (getting nettled all the way), and into the river itself – on foot, I hasten to add, not arse over tit. I waded across to a small island mid-river, and there I parked myself, smug in the knowledge that this particular swim must surely have been fished only a handful of times in recent years, if at all. The swim was just as I imagined it would be: the main flow running over a shallow gravel bar and into deeper water right in front of me. There was (relatively) slack water either side of the customary crease, and at the inaccessible far bank some bushes protruding right over the water’s edge. Perfect chub territory, so it would seem. 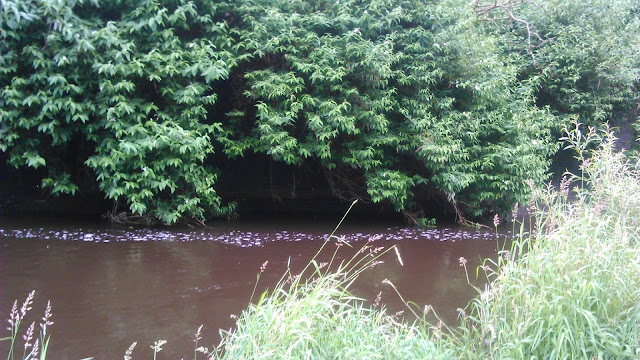 The river was carrying a little extra water, and had a nice colour to it – almost perfect, to my mind, for slug fishing. The biggest, blackest slug in my bait box called for at least a size 4 hook, so one was carefully tied to a hooklength of slightly lower breaking strain that the main line (4.6lb vs 5.6lb) so that I could pull for a controlled break should the rig become snagged. First run through showed that some weight needed to be added, as the slug barely sunk a few inches below the surface. A single AAA shot just above the hooklink improved matters, but trundling the rig through the near side slack, and right under a very inviting bush (ooh, matron!) produced nothing. A few more runs through proved that no-one was home on the near side. Lobbing the slug with a load plop into the far side slack also proved disappointingly fruitless too, although the rig was very difficult to control unless I held the rod sky high to keep the line from the crease, and then it was difficult to keep the line out of the bushes. 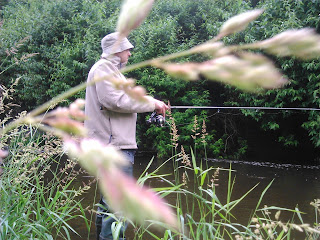 Then I considered that maybe the slug should be presented right in the crease. After all, the main flow carries the food and debris, and the fish lie in wait in the slacks and eddies, ready to intercept anything that looks edible, right? The slug was slung mid flow with a loud plop, and due to the increased flow, needed a further SSG shot to help it sink. Thereafter, it trundled down the swim nicely. Bail arm off, I was slowing down the flow of line trying to make the slug trip along the river bed. Half way down the run, the pull of line from the spool quickened, and I figured that big old fatty slug had hit a strong current and was being swept along by it. Sensing that the slug must now be some distance downstream, and not wanting to get caught in the streamer weed below, I retrieved the rig and was surprised to see a bare hook. Could the quickening of line being pulled from the spool have been a take?


Maybe a fish had snaffled the slimy black offering and darted downstream with it? The next few runs down the exact same path, at a rather pedestrian pace, proved that it probably was a take! For the next half an hour I tried to encourage another bite, but aside from a few lost hooks owing to snags, it was uneventful. It was now time for me to leave too. Bollocks!


So in summary: I wasn’t feeling it, then I felt that I might feel it, then actually felt it, and now I felt a right pillock! What if I’d struck at the pull? Surely a nice fat chub would have been the culprit, such was the size of the slug - one that could surely only fit into the cavernous mush of a decent chevin. Or barbel even, that rarest of things on the Sheffield Don? Of course, I didn’t recognise it as a pull at the time, so maybe I can take some small comfort from that. Maybe the pull wasn’t a pull at all, and I’m just convincing myself that something happened in order to make myself feel, bizarrely, a bit better about it?!


Anyway, one thing I’ve learned over the years is: time on the bank is never time wasted – blank or no blank. I’ll be better prepared next time. And there will be a next time. When I get that feeling.
Posted by Rob Bowring at 18:32 No comments: